Ministry of Attorney General commits to reviewing system with staff 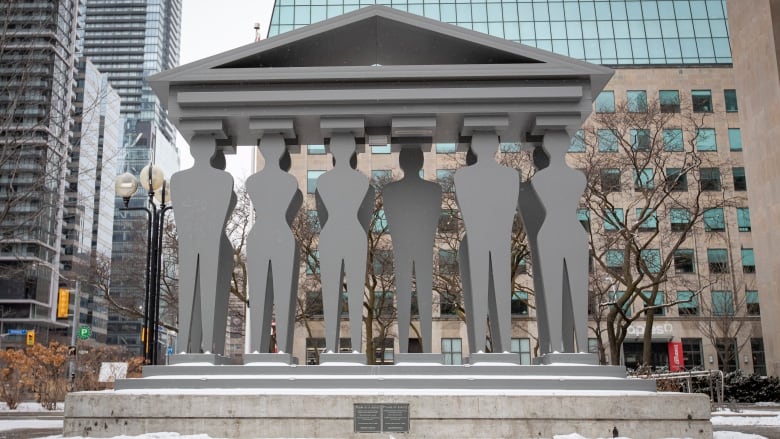 The Pillars of Justice sculpture outside the Ontario Court of Justice, in Toronto, on Feb. 12, 2021. Since the pandemic began, thousands of virtual court cases have proceeded without incident, says Kathryn Manning, co-chair of an Ontario task force on court e-hearings. (Evan Mitsui/CBC)

The co-chair of an Ontario task force on court e-hearings says the Zoom-bombing of a Brampton virtual courtroom on Tuesday is rare, but troubling.

The court was trying to hear a civil matter between Kelly Donovan and the Waterloo Regional Police Services Board. As the defense began to address the court Tuesday morning, the session was interrupted by people attending over Zoom, who disrupted the proceedings by sharing their screen to show pornographic and hateful images.

"It's obviously shocking, because if you're in a courthouse for an in-person hearing, nothing of the sort could happen because you're not on the internet," lawyer Kathryn Manning told CBC News.

Anyone who interrupted an in-person hearing in a similar way could be found in contempt of court, Manning said, and may face a fine or even jail time. In theory, this could happen during a virtual court hearing as well. The problem is the practical matter of tracking down the person responsible.

Arrested on the spot

"Figuring out who that person is could be tricky," said Manning, who is also a litigator with the Toronto firm DMG Advocates LLP. "As opposed to a person who's physically in a courtroom doing something [and] could be arrested on the spot if police felt that was necessary."

In a statement to CBC News from the Ministry of the Attorney General, a spokesperson said videoconferencing platforms create "unique challenges that do not present with in-person hearing."

The ministry said there are ways to prevent the people attending a remote hearing from sharing unauthorized and offensive material.

It committed to "reviewing these mechanisms with the courts and court staff to ensure the dignity and integrity of court proceedings are not subjected to unauthorized and offensive interruptions."

Since the pandemic began, Manning said thousands of court cases have proceeded virtually without incident. This is a good thing, she said, because otherwise the justice system would have "ground to a halt" and it's important to provide public access to the courts.

"Our court system is really important and it needs to be open and accessible to the public but it also needs to proceed in the way it would've in the courthouse the best it can."

But, she said, there remain several issues that have yet to be fully resolved — from Zoom bombers to the question of how to prevent people from recording or taking screen shots during sensitive virtual hearings.